Back when Dusty Tuckness was 12 years old he didn’t sneak out to ding-dong ditch or teepee the neighbor’s yard. He snuck out to fight bulls. His parents found out, of course. But they didn’t ground him or take away his cowboy hat. “My dad realized there probably wasn’t going to be a whole lot of changing from it,” Dusty says. “So he started supporting me. And my mom, she come around too.”

It didn’t hurt that Dusty’s dad also fought bulls and his mom was in the rodeo industry too. Once his parents realized Dusty was serious, they dedicated themselves to showing him the ropes. “I just kinda shadowed them all the time,” Dusty says. “Dad would take me out to rodeos in the summer, traveling all over four or five states,” encouraging Dusty’s passion to pursue bullfighting as a career.

“With Dad fighting bulls, that was kinda the big picture,” he says. “I tried riding a few bulls, but it just wasn’t for me. I’d much rather be in front of them than try to stay on their back for eight seconds.”

Inches away from a thrashing, bucking bull is not where most of us would hope to find ourselves. But bullfighters are a special breed. And they have an important job.

“A bullfighter is cowboy protection,” Dusty says. “It’s our job to put ourselves in a position to get the bull rider out in good shape.”

It’s a little like being a Secret Service agent. Except you’re not walking along stolidly with an ear piece, mirrored shades and a grim look on your face. You’re dancing with a giant bull to get him to go where you want him to go — toward you and away from the cowboy.

“Once you realize an animal that’s 2,000 pounds is locked onto you and you’re not gonna outrun them, instinct kicks in and you learn to stay really calm,” Dusty says. “It’s a game of inches. One day I might be able to sneak by the bull, and the next he may have the upper hand on me.”

Injuries come with the territory. Broken bones. Getting knocked out. Hooked. Thrown in the air. Stepped on. Run over. Sewn back together.

“One of the main qualities you see in bullfighters is a mental toughness,” Dusty says. “Being able to fight through the pain from one performance to the next, or one bull to the next.”

It’s not a job you take lightly. But it is a job that can take a toll on you. Especially when you’re traveling sixty to seventy thousand miles a year, doing 10 rodeos a week, fighting hundreds of bulls, then getting back in your pickup and driving 19 hours straight to the next rodeo.

“You gotta know how to take care of your body,” Dusty says. He works with sports trainers to stay fit and watches what he eats.

Dusty’s been a bullfighter at Cheyenne Frontier Days since 2012. He considers it a dream come true. He was working a rodeo in Kansas when he got the call.

“One of the bullfighters got hurt and they told me to put the pedal to the floor and get here ASAP,” he says.

“Cheyenne Frontier Days is a feather in anybody’s hat,” Dusty says. “There’s so much history. If you’re in rodeo, you want to come to the daddy of them all. I wouldn’t trade it for anything.”

With the western way of life rooted in his heart, Dusty is proud to call Wyoming home. And he likes something else about living here, too.

When he looks out his backdoor, he doesn’t see a bunch of houses. Just wide open countryside.

Learn about more about rodeo athletes competing on Team Wyoming. 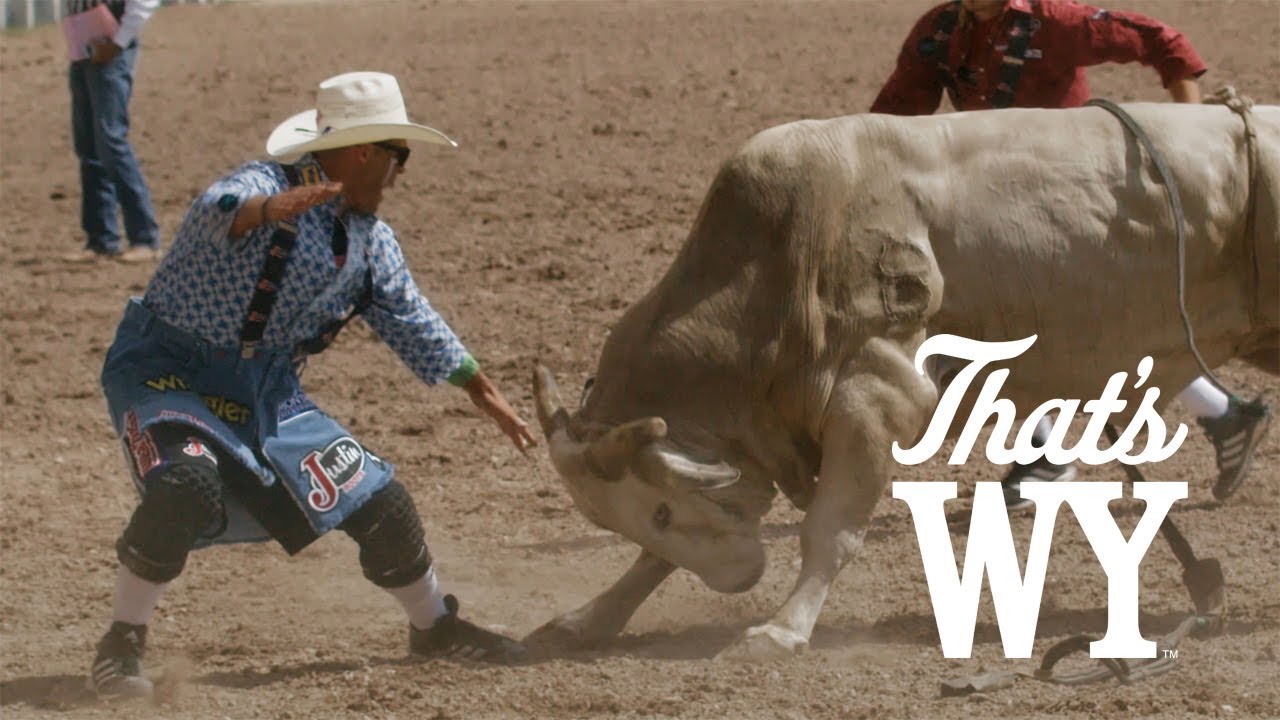