Devils Tower — the iconic monolith in northeastern Wyoming — juts straight into the air, rising 1200 feet out of the grasslands near the Belle Fourche River. From miles in any direction, you can see this unimaginable pillar on the horizon. This geologic formation is so mesmerizing it’s no wonder that in 1906, President Teddy Roosevelt established it as the nation’s first national monument. Today, it’s a mecca for hikers and rock climbers seeking to marvel at its beauty and scale its steep walls.

But this tower has a history from long before settlers first laid eyes on it. Bear Lodge, as it is known to over a dozen Northern Plains tribes, is rich in history. For thousands of years, the Cheyenne, Crow, Arapaho, Lakota, Kiowa, and other tribes have told stories about and held ceremonies under the shadow of this tower. When you plan a visit to this classic Wyoming destination, you will enrich your experience by learning and respecting the cultural significance of this sacred place.

The Origin of Bear Lodge

Dozens of narratives exist about the origin of Bear Lodge, passed down between tribe members for generations. One such story comes from the Crow Tribe.

Before the tower, two young girls were playing among large boulders in the area. This region was populated by bears, and one especially large bear saw the girls and was going to eat them. The girls scrambled up to the top of the nearest rock, but they couldn’t escape the bear. Then, the Great Spirit saw that the bear was about to catch the girls and caused the rock to grow tall, allowing the girls to escape the bear. The bear continued to claw at the tower but couldn’t make it to the top of the rock. You can still see the claw marks of the bear, and the girls are still atop the tower.

While each tribe has its own interpretation of this remarkable formation, the bear theme permeates across the oral histories of Plains tribe members. In fact, the name “Devils Tower” — which originated after a member of a scientific expedition misinterpreted the name Bear Lodge to “Bad Gods Tower” —  does not accurately represent this sacred site. Currently, a proposal to change the name to Bear Lodge exists, but it can only occur by congressional action or a Presidential Proclamation.

Today, many return to the site to worship, fast and celebrate. Throughout the year — but especially in June — tribes perform ceremonies such as sweat lodges, vision quests and group rituals, like the Sun Dance.

When you visit, you may see colorful cloths or bundles adorning trees near the base of Bear Lodge. Tribe members leave these as personal prayer offerings or in remembrance of a person or place. Please respect these sacred ceremonies and do not touch these objects.

Every year, thousands of climbers drive across the country to the phonolite porphyry walls of Devils Tower to climb the columnar pillars and intensive crack systems. But according to the National Park System, many tribe members consider climbing a desecration of a sacred site.

So, every June, the monument closes to rock climbing to recognize Bear Lodge as a sacred location. As tribes return to Bear Lodge for religious ceremonies in June, they can observe their spiritual practices without the noise and distractions that come with dozens of climbers high on the tower’s walls.

There is one caveat: this closure, which began in 1995 through the Climbing Management Plan, is entirely voluntary. The intention of the voluntary nature is to build mutual respect between the climbing and native communities. However, in recent years, compliance with the climbing ban has been steadily decreasing.

If the columnar walls of Devils Tower call to you, please respect the ban and don’t climb during the month of June. Climbing activist groups like Access Fund support the ban and request that you honor it.

Pro Tip: If you want to rock climb in Wyoming during the month of June, consider Ten Sleep, Lander (Wild Iris and Sinks Canyon State Park), or Vedauwoo — all world-class destinations that don’t have a climbing ban.

Bear Lodge/Devils Tower is a place of worship, sacred to the dozens of Northern Plains tribes that have occupied the area for thousands of years. It is also a meeting place of tourists, climbers, and hikers who find their own sense of awe as they stare up at the tower walls. By respecting the area as a holy site and acknowledging that we are visitors to this land, we can coexist and appreciate the majesty of Bear Lodge for generations to come. 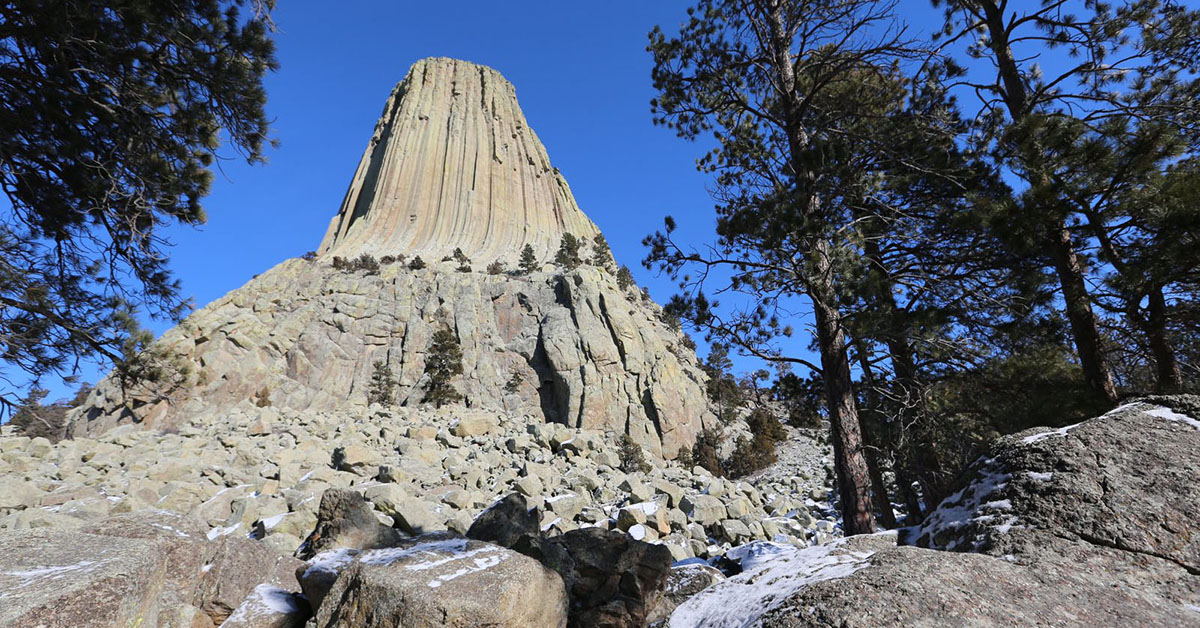 About Hannah Singleton Hannah is a freelance journalist, content writer, and photographer. In her spare time, she is an outdoor guide, knitwear designer, and educator. She seeks character-driven narratives that expand collective knowledge, build empathy and understanding, and highlight the everyday experience.