11 of the Most Historic Accommodations in Wyoming

There’s perhaps no better way to experience Wyoming’s dynamic and thrilling history than immersing yourself in a historic building at one of its famous hotels. Legendary characters of the Wild West had an influence on many aspects of these properties, from details like original furnishings (some restored, some preserved) and preserved-in-time moments like bullet holes in the wall. Here are 11 must-see destinations throughout Wyoming that will take you back in time to the heyday of the Wild West.

The Occidental Hotel was originally built in 1880. Photo: Buffalo Chamber of Commerce

From the bullet holes in the wall to the back bar that was brought to the location 100 years ago, the Occidental Hotel in Buffalo, Wyoming, is as close to stepping back in time as you’ll get. The building had fallen into disrepair by the late 1990s, but restoration began in 1997, bringing the decor and interior back to its former grandeur. The guest list is an Old West Who’s Who: Teddy Roosevelt, Buffalo Bill, and Calamity Jane all bedded down in this regal building at one point. Each room and suite has a blend of historical furnishings and modern amenities, and they all are uniquely decorated with period-appropriate wallpaper and decor. Choose from 18 different rooms that feature sitting areas, claw-foot tubs, and antique furniture.

Built in 1907, the Mountain View Historic Hotel was completed for the celebration of the first train to reach Centennial, Wyoming. At the time, it cost $8,000 to build and featured 20 guest rooms with a “most improved system of plumbing”—though that may not be as impressive as it sounds to modern ears, as bathrooms were located in the stables. But from the Gold Rush to the timber trade, Centennial was a bustling hub with shopping, trade, and housing—and the Mountain View Hotel was the center of the action. The hotel is intrinsically linked to the history of Centennial, situated between grasslands, old-growth forests and the Snowy Mountains.

Now restored to much of its original state, the hotel is home to six guest rooms—all with private indoor bathrooms, of course—and a cafe. It’s brimming with the region’s history—enough to be placed on the National Registry of Historic Places.

The Nagle Warren Mansion in Cheyenne dates back to the city’s boomtown days in the late 19th century.

The capital was one of the most prolific and wealthy cities of its size in the late 1800s, when elegant homes such as the Nagle Warren Mansion popped up throughout the area. Today, the mansion is one of the last remaining grand houses of the era, boasting period touches like an imported chandelier in the entry, stained glass, a marble fireplace, and even carved leather ceilings. Its exterior is just as striking, with majestic turrets and lush landscaping that make it a Cheyenne focal point. While you’re in town, also be sure to swing by the Historic Plains Hotel, built in 1911 to host the city’s most distinguished guests.

The Irma Hotel, built in 1902 by Buffalo Bill Cody and named for his youngest daughter, is a must-stop for history buffs. In fact, try-outs for Buffalo Bill’s Wild West Show were held on lots just west of the hotel, at a time when buffalo still roamed free through downtown Cody. The hotel also served as a destination for European high society players during their hunting trips in the region. It has been expanded several times over the last century, but the original cherrywood bar, which was a gift from Queen Victoria, still stands in the Buffalo Bill Bar—and it’s one of the most photographed spots in town. Modern-day guests can still follow in Buffalo Bill’s famous footsteps by staying in his private suite.

Other notable nearby properties include the Chamberlin Inn, a quaint 21-room property in downtown, or the Elephant Head Lodge, a stunning log-cabin resort just 12 miles from Yellowstone Park.

Featuring log cabins built in 1929, The Log Cabin Motel is Pinedale’s longest continually operated lodging property. The cabins were originally built and owned by a Pinedale business owner named Walter Scott, who used it as lodging for patrons who needed to pay off debts at one of his two stores. The eight cabins were later used to house expecting mothers during harsh winters, making it more accessible for them to get the care they needed from the local doctor. Over the years the motel had a number of owners, including someone who won it in a hand of poker.

Now on the list as a National Registered Historic Place, The Log Cabin Motel is in good hands. The couple currently operating this local gem put a great deal of effort into maintaining and improving the facilities, reinvesting into their business each year with renovations to keep guests comfortable—while maintaining the spirit of the Old West, of course.

Another nearby historic property is Gannett Peak Lodge, which was built from abandoned barracks after the termination of the New Deal federal program caused a nearby camp to close. These affordable cabins feature special deals for Continental Divide Trail hikers, Great Divide bikers and guests hunting in the area.

Of Yellowstone’s man majestic buildings and hotels, the iconic yellow Lake Yellowstone Hotel is one of the finest. The historic accommodations are situated on Lake Yellowstone, giving guests and visitors an immersive experience in America’s first National Park. Built in the late 1800s to house the influx of tourists to the park, the property was restored in 2014 and features a variety of accommodations as well as fine dining options. Continue the tour of Yellowstone’s historic accommodations with a visit to the soaring ceilings and rustic grandeur of the Old Faithful Inn, the namesake lodge honoring the world’s most famous geyser.

Buffalo Bill Cody was one of the original owners of the Sheridan Inn.

The Sheridan Inn was one of the first hotels in Sheridan, built in 1892. Buffalo Bill played an instrumental role in this building as well, operating as part owner and assisting with hotel management and functionality. The hotel features 22 rooms, one dedicated to Buffalo Bill, and the others decorated in remembrance of 21 other key people from his life, with art and decor nodding to their history on the property. The Sheridan Inn is also known for its massive wrap-around front porch, which covers three sides of the building. The porch was a favorite of Buffalo Bill, and you’ll find many historic photos of him relaxing with visitors who came through town—just like modern-day guests who can take a selfie in the very same spots.

Furnished with original items and situated just north of Medicine Bow National Forest, the Historic Elk Mountain Hotel opened in 1905 to provide housing (and a dance pavilion) for weary travelers during long treks across the state. It operated continuously until 2000 when it closed for renovations. At that time the windows, doors, stair case, china cabinets, and flooring were all restored. The embossed tin ceiling was also refurbished to its original grandeur. Today the full-service hotel features 12 rooms, several named after musicians like Louis Armstrong and Lawrence Welk who performed at the resort during the big-band era.

The Wort Hotel opened in 1941, but it had been a dream of its namesake, Charles Wort, long before that. Wort had been living in town for nearly half a century after settling in Jackson Hole in the late 1800s. He staked his claim on several plots of land around town, but it was his two sons who were finally able to make the hotel a reality. Since then, the property has had some ups and downs, including a fire in 1980; it was reopened a year later after damage repair. This landmark has undergone extensive renovations in the years since, and it now features 55 guest rooms and five Western-themed suites. It’s also well known for its Silver Dollar Bar, which features 2,032 uncirculated Morgan Silver Dollars inlaid into the surface of the bar.

For more than 100 years, the Virginian Hotel has welcomed travelers from around the world. A National Historic Landmark, the Western-leaning property sits as a hulking structure in the tiny town of Medicine Bow and provided rooms for railroad workers, rodeo contestants, dusty cowboys and people traveling north from Salt Lake City. Grab a pint in the Shiloh Saloon, where you can see bullet holes in the walls from real-life shootouts.

This Victorian-style building was built by German immigrant Frederick G. Wolf for $6,000 in 1893.

In its heyday, the Wolf Hotel was the central gathering place for socialites and events in and around Saratoga. Since its founding in 1893, this building also has served as a stagecoach stop and a barbershop. The hotel is ideally situated: nearby attractions include hot springs, world-class fishing, downtown shopping, and year-round outdoor recreation. Guests will appreciate the hotel’s Victorian-era furnishings and antique Western feel before heading out to explore the area. 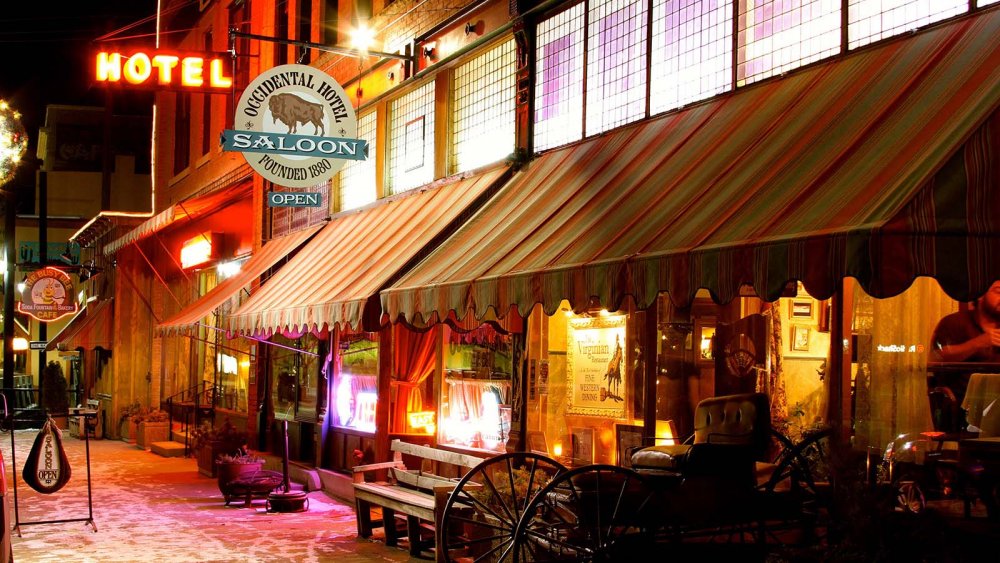