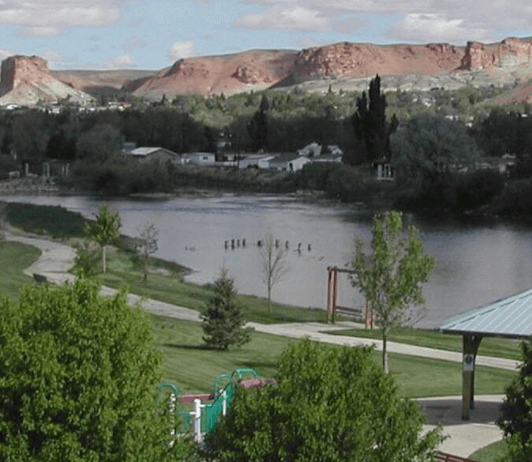 EXPEDITION ISLAND
HISTORY + FAMILY FUN IN THE MIDDLE OF THE GREEN RIVER
If you want to blend a little history with your river fun, Expedition Island in the City of Green River is at the ready. Originally a starting point for Major John Wesley Powell’s expeditions in 1869 and 1871, this island oasis is the perfect spot for family picnics and Blue Ribbon trout fishing. It also serves as the ideal launching off point for tubing, kayaking and rafting on the river.

Or just take a stroll on the island’s beautiful Greenbelt Pathway while the kids monkey around on the playground. If you come at just the right time, you can catch an event like the River Festival, Art On the Green or Flaming Gorge Days.

HISTORY OF EXPEDITION ISLAND
Expedition Island is a National Historical Site due to its role as the starting point for two expeditions down the Green and Colorado Rivers led by Powell in 1869 and 1871. Powell began both trips near Expedition Island and mapped the river system, successfully documenting the Grand Canyon.

It’s generally considered that on these expeditions Powell completed the exploration of the last, large unknown land area in the continental United States.