Skijoring in Wyoming: What Is It & Where Can You Watch?

Rodeo may be Wyoming’s official sport, but skijoring is the state’s unofficial winter sport. It is a uniquely Western athletic and cultural phenomenon.

But what is skijoring, and where can you go to watch this unique sport (or even participate in it yourself)? This guide breaks down the sport and provides the top six locations in Wyoming for skijoring.

Skijoring is a sport that combines skiing and horseback riding. There are two participants: one rides the horse as quickly as possible, while the other straps on skis and holds on to a modified water ski rope for dear life as the horse pulls them.

In more exciting, contemporary versions of the sport, skiers, and riders must navigate through slalom gates and over jumps as big as 7 feet high. That’s what you’ll see in skijoring competitions across the state.

The History of Skijoring

Historians think the new ins of the sport come from the Sami, indigenous people from Norway. The name derives from a Norwegian word that literally means “ski driving.” The Sami skied behind reindeer as a method of transportation on Nordic skis.

Skijoring gained popularity as a form of recreation and eventually made it into the Nordic games in the early 1900s, where its popularity spread throughout Europe.

It made its way to the American West after World War II when soldiers brought it home after seeing it practiced in Europe. It’s now practiced by cowboys, skiers, and adrenaline junkies alike.

There are other versions of the sport. Some riders tour behind dogs on cross-country skis. Others even tour behind cars or snowmobiles. But if you visit Wyoming, you’re most likely to see cowboys and cowgirls skiing behind horses. There are several opportunities to see skijoring for yourself, and maybe even give it a try.

Merrian Webster defines skijoring as a winter sport in which a person wearing skis is drawn over snow or ice (as by a horse or vehicle). Common animals used in this sport are horses and dogs. In equestrian skijoring, the competitor wears skis and holds tug lines attached to the horse’s harness where canine skijoring requires cross-country skis and poles with the person wearing a belt attached to a dog harness.

During the long cold winters, horses and people get restless. Thanks to the Scandinavians, there’s a sport that provides ample opportunity for both to get exercise from an exhilarating sport—skijoring. Skiers who are brave enough to give this a go are pulled by a horse that is either ridden by a second person or controlled by the actual skier.

With its origins in dog mushing, dog skijoring ditches the sled and harnesses the animal to a skier wearing cross-country skis. Dogs of all shapes and sizes who are physically fit for the challenge can pull a skier and the most popular breeds include Huskies, Samoyeds, or Alaskan Malamute.

Family dogs can get into the fun, too, with breeds suitable for skijoring including border collies, labradors, malinois, german shepherds, Rhodesian ridgebacks, cocker spaniels, vizslas, and golden retrievers.

Ready to see some skijoring in action? Here are the top six places in Wyoming where you can go to check out this sport.

The Sheridan Winter Rodeo introduced skijoring two years ago and it has been a huge hit since. Competitors can register in one of five categories: Open, Sport, Novice, Youth, and Snowboard.

Epic Winter Action in the Heart of Sheridan

The annual Sheridan Winter Rodeo takes place in February on Broadway, a major roadway in the heart of historic downtown Sheridan. Locals and visitors by the thousands pack the streets to watch the athletes and their horses traverse the course for cash, buckles, and other prizes.

The Sundance Winter Festival also offers visitors a chance to see competitive skijoring in action or register to try it for themselves. The skijoring events take place along Sundance’s Main Street, making it easy to get a glimpse of this wild sport while strolling downtown.

Competitors will race an approximately 700-foot track on Main Street with jumps, rings, and ski gates designed with horse and rider safety in mind. Winners will be awarded cash prizes.

Visitors to Pinedale are encouraged to actually experience a form of skijoring themselves. At the Winter Carnival in February, visitors can watch competitors race for a prize. Then, if they’re feeling inspired, they can harness their dog up and take them for a ski through the vast wilderness that surrounds Pinedale. For an adapted and lower-intensity experience, try dog sledding with one of the guide companies in the area.

The event is scheduled for February 11 and 12, 2023, at the Pinedale Rodeo Grounds starting at 9 a.m. during the Winter Carnival and promises to deliver 120+ teams competing Saturday and Sunday. The open pro teams consisting of horse, rider, and skier do not include novice and youth riders.

The open 3D is for beginner teams who are new to the sport and beginning-level competitors riding horses that may not have speed enough to be competitive in the other division. The final division is youth for a non-competitive fun run where one team member must be 12 or under.

Fees to participate are as follows:

​The event is put on by Main Street Pinedale, a non-profit organization, and funds raised from the Winter Carnival are added to the Facade Grant program, operating the Farmer’s Market and the yearly community clean-up.

Saratoga’s competitive skijoring races have $10,000 in prizes on the line, so you’d better believe these racers are among the best. In addition to top-level competitors, this event allows kids to join in on the action both on horseback and on skis at an adorably slower speed.

The 5th annual Saratoga Skijoring Races is scheduled for February 4 and 5, 2023. Competitors will saddle up and ski hard in the open and sports division, the amateur/novice division and the youth division. Competitors will race a 700-foot straight track that typically includes three jumps, a Leadville style ring, and multiple ski gates designed with safety in mind.

Fees to participate are as follows:

Visitors to Jackson Hole give skijoring a try through one of the valley’s many sled dog guides. But the authentic skijoring experience happens every winter courtesy of the Jackson Hole Shrine Club. Jackson’s event relies on the elements, so location and dates vary.

The Coney Classic Alpine Skijor is for the dogs. Its spirit is more playful than competitive — dogs can pull their skiers or simply run alongside them. Some racers enter with no dog at all. Costumes are encouraged and even rewarded. Anyone can enter, and the proceeds benefit the Alpine Cross Country Ski Association and Lucky’s Place Animal Shelter in neighboring Thayne.

For more information, you can visit the official event site at https://www.alpinetap.org/events.html 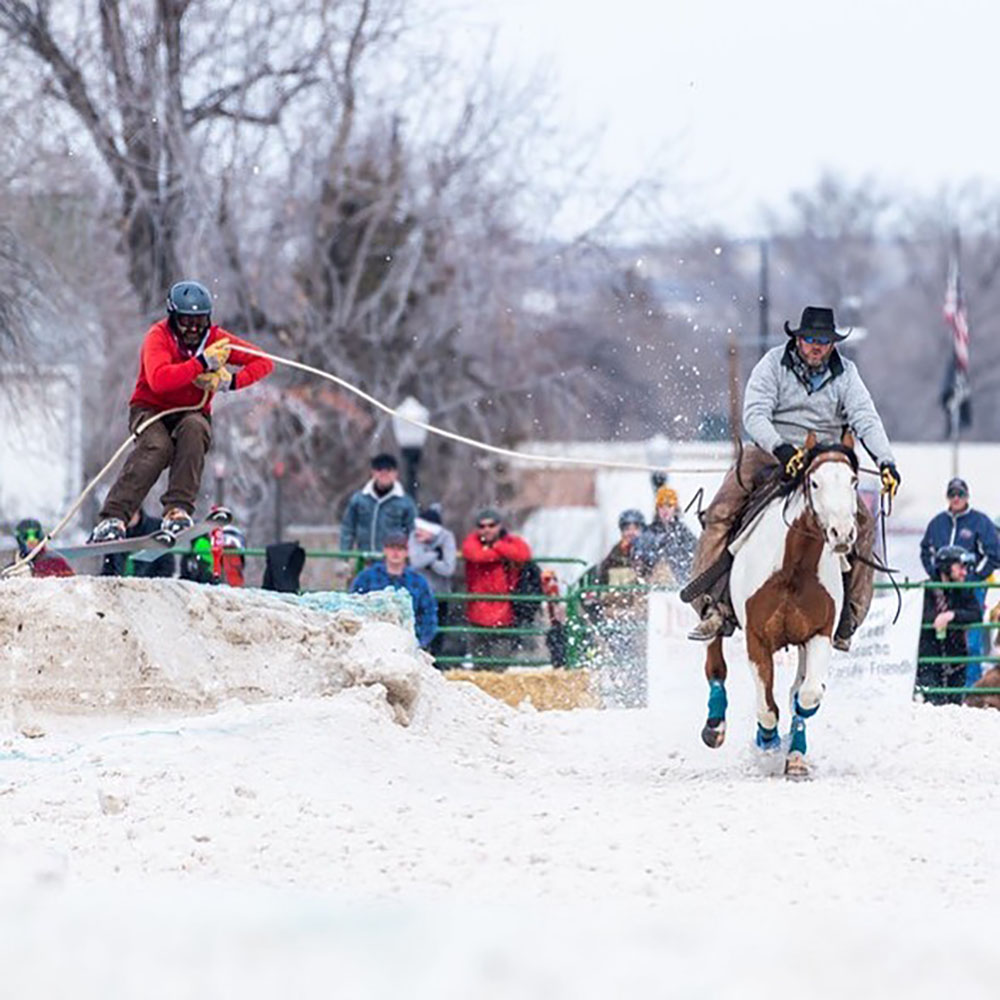