Experience the Power of Powwows in Wyoming

A powwow is a steady thump of beaters on a hide-covered drum, a cadence of mixed voices singing in Arapaho, Shoshone, Crow, or Lakota, and the sweep and swirl of men and boys wearing brightly colored regalia. It’s young girls with fringed shawls, older women dressed in buckskin and even tiny tots in beaded moccasins and creamy white buckskin outfits. Begun as a ritual gathering of spiritual leaders and medicine men, powwow is now a social event.

What is a powwow?

A powwow is a Native American cultural event that features group singing and dancing, and each features a variety of dance styles. Men wearing traditional leather clothing and eagle feather bonnets, perform first, often mimicking the movements of animals or birds. They sometimes dance in a crouched position as though they are tracking or hunting. Women wearing traditional long deerskin dresses adorned with elk teeth, porcupine quills, beads or cowrie shells dance slowly and regally, taking small steps that cause the fringe on their gowns to sway in rhythm to the drum.

Most public powwows involve dancers from many tribes, and varying drum groups bring individual tribal songs to a gathering. They begin with a grand entry when dancers carry the Eagle Staff and American Flag into the dance arbor. As you would do at any other event where the American Flag is presented, you should stand during the Flag Song. In Wyoming, you can watch powwows across the state during the summer.

The history of powwows

Powwows originated with the tribes that roamed the great plains from Canada to Texas. The dance evolved during the Wild West shows of Buffalo Bill Cody. They involved men in elaborate outfits with feather bustles at their hips and shoulders and brightly colored headdresses. These men leapt, twisted, spun and swirled in a fast-paced dance that showed their endurance and strength.

Female dancers also showed off fast footwork, as they leapt and spun in their brightly colored clothing featuring shiny sequins and long-fringed shawls that made them look like flying birds or butterflies. Other young women wore dresses ornamented with dozens of tin cones that jingled when they walked, giving them the name of jingle dresses.

Today’s powwows involve either intertribal social dances or competitive dancing, and most gatherings are a combination of the two styles. During intertribal activities, people of all ages and genders, including both Indians and non-Indians, are welcome to enter the arbor and dance. In all cases, be sure to respect the dancers. Do not touch their outfits, and only take photos when the announcer gives permission to do so. The regalia these dancers wear can be a combination of heirloom clothing and modern recreation. Although some dance outfits may reflect a particular tribe in style, others combine traditions as the dancers keep their culture alive.

Young Native American dancers say they participate in powwows as a way to honor their cultural traditions and because it makes them feel free and close to their elders. Each year, the drums are in place for several powwows across Wyoming. Larger events on the Wind River Reservation include the Chief Yellow Calf Memorial Powwow at Blue Sky Hall Ethete in late May, an Arapaho Housing/Drug Elimination Powwow at Blue Sky Hall in early June, the Northern Arapaho Powwow at the tribal powwow grounds near Ethete in early August, and the Shoshone Labor Day Powwow at Fort Washakie.

Other powwows in the state include the annual Plains Indian Powwow at the Buffalo Bill Center of the West in Cody in mid-June and a smaller demonstration at the Indian Village during Cheyenne Frontier Days the last full week of July. 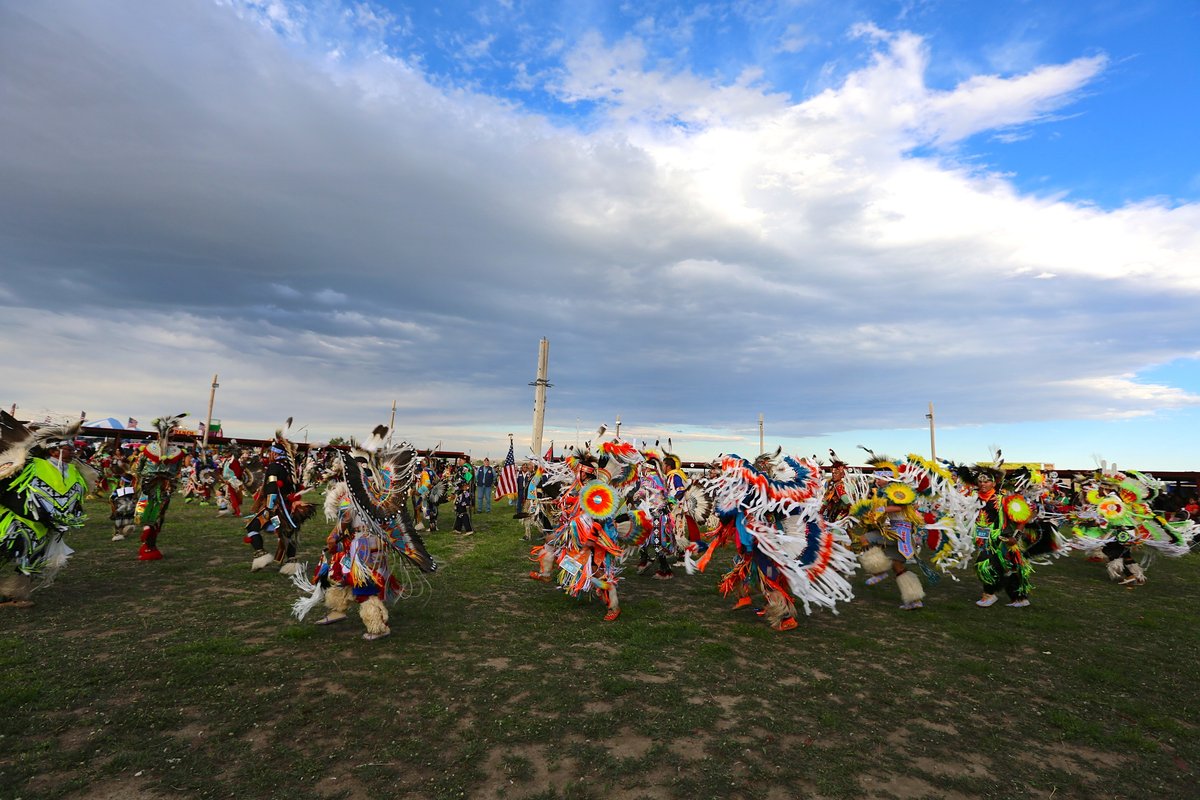