September 6 marks the 150th anniversary of the first woman to vote in a general election, which happened in Laramie, Wyoming a full 50 years before women in the rest of the U.S. could cast a ballot. That first female voter was Louisa Gardner Swain, and you can find a full-sized statue of her at the Wyoming House for Historic Women, just a block from where that first vote was cast in Laramie.

It wouldn’t be the last time that Wyoming was at the forefront of promoting equality between the sexes. In addition to other political achievements—like electing the first female governor in 1924—Wyoming has also been a leader with women in the workforce. With its small population and rugged terrain, the state has always relied on women to play a significant role in getting things done, and that continues today with many women at the forefront of the business community.

You don’t have to look hard to find women in leadership positions at companies across the state. Here are six Wyoming businesses that are prime examples of what women are accomplishing in the state. If you are unable to enjoy these businesses this year, make a note so you can experience them when it is once again safe to do so.

According to Maria Kopper, who along with her husband, John, opened Bella Fuoco Wood Fired Pizza in 2013, it was “a love of pizza in general and enjoying the way that food can bring people together” that nudged them to open their own business. Back then, the restaurant was a food truck with a mobile oven that allowed for quick and tasty pizzas to be eaten by hungry fans at festivals, concerts and local breweries around Cheyenne, WY.

Demand for this delicious pizza and devoted fans followed them to the brick and mortar location. There, they expanded their menu to offer paninis, calzones, pasta, soup and bread. With homemade dough and sauce made daily, it’s no surprise that they’ve been voted best pizza in 2017 by The Wyoming Tribune Eagle Reader’s Choice.

The light bulb moment for Backwards Distilling Company came in October of 2012. The Pollocks were eating dinner together, as they usually did, in downtown Casper.

“We love food and beverages, and we travelled a lot together to eat great food and drink great drinks,” says Amber Pollock. “When my brother, Chad, was complaining that he couldn’t find any new types of Absinthe (his favorite spirit at the time). My mom said, ‘Why don’t you make some?’ The rest is history.”

This suggestion kicked off a whirlwind of online research. They found that it was not only possible to make spirits, provided proper licensing, but also that small distilleries were booming in the United States. The “craft distilling industry” was trending upward, following a similar trajectory to that of the craft brewing industry. Amber had a passion and penchant for great cocktails, mom Kathy was in need of a career change after nine years teaching elementary school, and father Bill was looking for an alternative to retirement after 29 years working in and later co-owning a small business.

“We sent my brother around the country for about a year and a half to learn from other distillers,” Amber says. “We opened in 2014.”

Not only are all four members of the family passionate about their products, but the Backwards Distilling Company has allowed them to work together. “The most special part of the business for me personally is the fact that we get to do something as a family and we get to bring new things to our community,” Amber says. “The products we make are special because they are completely made from scratch and all full of personality.

Amber, who helped found and is now president of the Wyoming Distillers Guild, enjoys being working the front of the house in the distillery, getting to know customers and learning what they like about the products. “We keep pushing forward to make Wyoming a great place to do business in the craft spirits industry because we know that it has the potential to be a hot spot of craft beverages and we believe that the craft beverage industry can be a big win for the state.”

Considering Wyoming’s history of ranching, it’s appropriate that one woman-owned business is helping to keep that tradition alive. Mountain Meadow Wool, located in Buffalo, Wyoming, is dedicated to both supporting local ranchers and raising awareness about the traditional culture of the American West.

Karen Hostetler and her business partner first considered opening up a store focused on natural products, but when she looked around for some local Wyoming wool to carry, she found it was basically non-existent. “At that point in time, the wool that was raised in Wyoming was all sent overseas,” she said. “So we bought a bail of wool from a rancher and hauled it all the way to Canada and had it made into yarn. At that point, we decided we wanted to have one of those (facilities) in Wyoming.”

In 2007, Hostetler opened the Mountain Meadow Wool Mill as a full-service mill that creates yarn in a wide range of textures and colors for a variety of uses. It also sells finished goods with the yarn it makes. The business helps keep the long tradition of raising sheep in the state alive, which dates back more than 100 years when Basque settlers from Spain and France arrived in the state. Now Hostetler is helping ranchers find a market for their product, with its focus on 100 percent American made and Wyoming grown wool, and thanks to Hostetler, more and more people are discovering that Wyoming is home to the finest wool in the country. For those looking to learn more about a product, you can even take a tour of the mill.

The Mill House, a boutique hotel in Lander Wyoming owned by Jill Hunter, reflects the town’s western culture and style—and it has a long history of its own. The structure was built in 1888 as Lander’s first flour mill, a much-needed addition to the community, as it previously took two weeks for flour to be transported from Rawlins. The mill remained in operation until the 1950s.

But in 2017, Hunter was able to transform the building to a place with 21st-century amenities while keeping the 19th-century charm. Visitors can choose from four different rooms with original hardwood floor and brick walls. The Mill House is filled with items created by local artisans, and the integrity of the mill’s iconic building remains intact. It’s become known for hosting weddings, charity events and parties, and visitors will find lots of outdoor adventure to enjoy in the region when they’re not relaxing at the inn.

If you’re looking for something that’s truly unique to Wyoming, The Bent & Rusty is the place to find it. The Laramie-based store and studio features one-of-a-kind artwork, home goods, and furniture, many crafted by one of the five women designers who use the space. Founded in 2013 at Bart’s Flea Market, the store has now become one of Laramie’s best-known boutiques.

Billie Eckhardt focuses on woodworking, creating furniture and other pieces with reclaimed wood and repurposed items; Larca Wicke works primarily in metal, but she often combines it with other materials as well, including wood, paper, and fabric; Lisa Merrill refinishes furniture with chalk paint and other finishes; Janet German creates custom graphics and paper products, and Stella Taylor makes hand-crafted quilts. Together the group has created a shop where you’ll find things that you’ve never seen before. And if you have an idea for a piece that you want, customized products are available that fit your personal style and specifications.

Even by Wyoming standards, the town of Chugwater is small, with only about 200 residents. But it has an oversized footprint thanks to a chili recipe that dates back more than 30 years. It was in 1986 that five farm and ranch families got together to purchase the winning recipe in the Wyoming State Chili Championship. The unique blend became known as Chugwater Chili, and it soon gained notoriety across the country.

After working at the company for several years, Karen Guidice and her business partner, Justin Gentile, bought the company and are working to keep the tradition alive while expanding its product line-up. In addition to the signature chili seasoning, Chugwater now offers a chili dip and dressing mix, a red pepper jelly, a steak rub, and chili nuts.

Written by Jeff Banowetz for Matcha in partnership with Wyoming Office of Tourism. 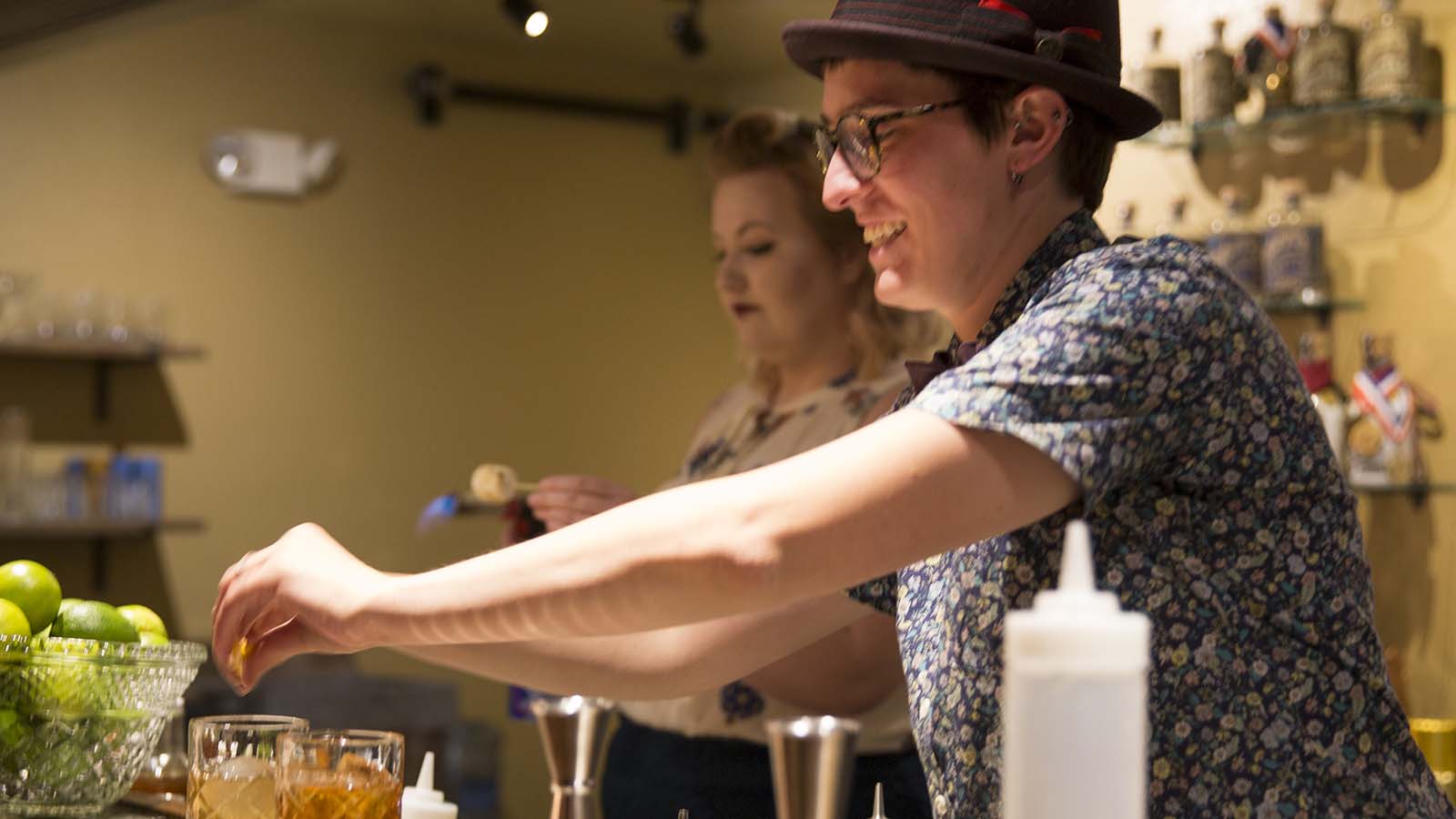