Sunny and 25: Outdoor Rock Climbing in a T-Shirt in Wyoming Winter

When January rolls around many travelers and adventurers in the Rocky Mountain West dream of being on a beach soaking up some sunshine. Perhaps the fantasy includes a drink in hand and the song “Sunny and 75” playing in the background. But Wyoming is full of surprises, and one of them is that you can get a suntan just as easily along the limestone cliffs of Sinks Canyon as you might on a beach in the middle of winter.

Climbing in the Winter

Nestled on the eastern side of the Wind River Mountains near the town of Lander, Wyoming. Known for having more moderate winters than some areas of the state, Lander sometimes gets the nickname “Landiego.” Don’t let the name fool you, Lander still sees chilly temperatures and snowstorms all winter long.

The magic of Sinks Canyon is that the rock climbs are all situated on the north cliff, meaning they get the warmth of the sun for much of the day. This can make it unbearably hot to climb there in July, but absolutely delightful in January.

The first time you tell someone you’re going outdoor rock climbing in Wyoming in January, they usually look at you in disbelief. When you add that you’ll probably be climbing in a t-shirt even though it’s only 25 degrees out, they just assume you are crazy. But it is absolutely true.

At just about any temperature above 10 degrees Fahrenheit, you can enjoy a delightful day of sport climbing in Sinks Canyon. As long as there aren’t clouds or significant wind, the sun heats up the limestone walls to perfection. This warm rock then creates a microclimate extending about 8-10 feet out from the cliff. VOILA! All of a sudden you are rock climbing in a t-shirt in January.

This winter phenomenon is precisely why Lander, Wyoming is home to many of the top climbers in the country. Todd Skinner was one of the first elite climbers to settle in Lander. While it was the climbing area Wild Iris that first attracted him to the area, it was the year round climbing thanks to Sinks Canyon that sealed the deal. And 30 years later, many climbers are doing just the same.

If you’re looking for a sunny winter climbing adventure, be sure to check out the Lander Rock Climbing Guide book. If you are new to climbing, reach out to Wind River Climbing Guides. 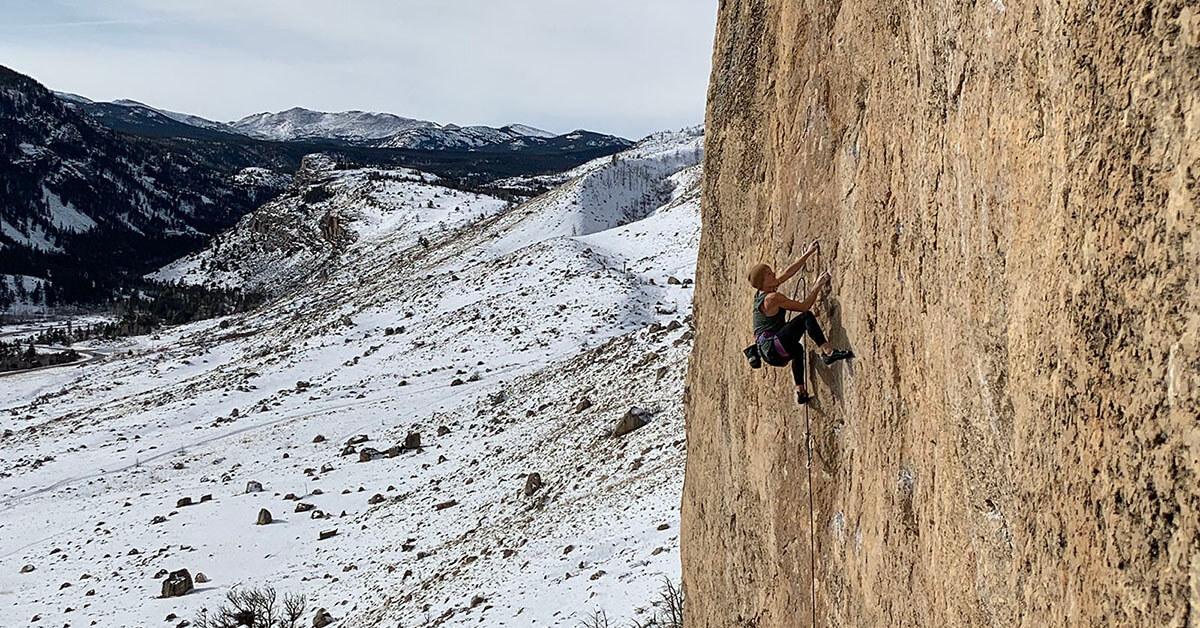 About Mandy Fabel You’ll find Mandy adventuring outside in Wyoming just about every day of the year. She takes full advantage of all seasons with her love for snowmobiling, mountain biking, rock climbing, snow skiing, dirt biking, and water sports. She and her husband Brian reside in Lander, Wyoming where they both moved to work as NOLS wilderness guides many years ago. Today she is the Executive Director of Leadership Wyoming and together they host a YouTube and Instagram channel called Granola & Gasoline.