Do you remember the starry-eyed look your kid gave you the first time you took them to Disneyland? Or maybe even a local amusement park? Their cotton-candy-and-carousel-induced euphoria had you feeling like you could do no wrong.

Fast forward a decade and your angsty teenager hasn’t given you a look of approval in years. Somehow those young starry eyes learned to roll upwards at the words family vacation. But it doesn’t have to be like this.

There is a Disneyland of family vacations for teenagers. It will have them tweeting, ‘gramming, snapping, and whatever-elsing to their friends back home that they have the coolest parents in the entire world.

The first night you arrive you walk through the wardrobe of Narnia and into the world of winter. This is not shovel-a skiff-of-snow-off-the-driveway-winter. This is full-on, snow-piled-higher-than-your-car-winter. But this isn’t cool in and of itself. This is like standing in line to get a ticket to Disneyland for the first time. You all feel excited, a little anxious, and maybe even a little cold given you are standing in a freezer. But a warm meal (and local beer or whiskey for you) settles everyone down a bit.

The next morning the excitement starts to build. You and your teenager will insert yourselves into an astronaut-esk outfit for the day (and because you are above 9,000 feet in elevation, you will probably wish there was an oxygen tank attached). Your teenager is trying to look cool, but also starting to realize the normal “coolness factors” don’t really apply here.

Your guide will give you basic instructions on how to operate the sled and stay safe. “Is there a governor on these things?” you ask. “Nope,” smiles the guide. You notice a smile under the helmet of your teenager as well.

Next you head out for a day of riding in some of the most pristine winter conditions in the world. You are shocked at the beauty of snow-covered trees and a world made entirely of white. And your teenager is shocked that for the first time ever, actual reality is more exciting than virtual reality.

That button they push under their thumb is a real throttle. That snow flying up into their face is real snow. That snowbank they just firmly planted the snowmobile into is a real snowbank. Oh the joys of watching teenagers discover real consequences while you sit safely planted on the trail. You contentedly watch the guide help dig them out of the obstacle they overconfidently thought they could handle. What bliss.

As the day goes on you realize something else. The guide is treating your teenager like an adult. They have entrusted them with a large (and rather expensive) machine. Instead of telling them what not to do, they are patiently instructing them on how to have the proper body position and technique to advance. The guide is also there to share a laugh, snap a photo, and help when they make a mistake.

After getting unstuck for the 20th time your teenager rides over to sit next to you. Together you watch the guide take a tree-line and pop off a jump that has you all in awe. Your teenager realizes they have just spent the day with a professional rider who has treated all of you like friends. In fact, the guide hasn’t just treated you like a friend, the guide is your friend.

You all ride back to the parking lot and lodge with sore muscles and cheeks tired from smiling in the cold. Wait a second. When was the last time you spent an entire day smiling with your kid?

After warm showers you head to the bar for dinner and another round of libations for the adults. You catch a glimpse of your teenager firing off messages, posts, and bold claims of the day to friends back home.

To your surprise, you notice they also include the photo with you in it. That hasn’t happened in ages.  And what is this hashtag? #coolestvacationever

You spell it out because you’re not that good at reading hashtags.

Are you convinced? Take a look at these prime snowmobiling guides and destinations in Wyoming and start planning your trip.

The Disneylands of Wyoming Snowmobiling

Sahen Skinner is a professional rider turned guide. He operates out of Star Valley, Wyoming (just south of Jackson Hole, Wyoming) and carries a line of the latest and greatest snowmobiles. He will have your teenagers trying things you never thought possible, while staying safe. He will also have all of you rolling in laughter the entire time, guaranteed.

Cameron Chimenti made snowmobile videos back when you made them on DVDs (don’t try to explain this to your teenagers, they won’t understand). He speaks the language of young people who want to push the boundaries, but will ensure they have the right conditions to fail and succeed. Cameron works out of Laramie, Wyoming (closest airport is Denver) and Dubois, Wyoming (closest airport is Jackson, Wyoming).

Brooks Lake Lodge might be the ultimate winter destination as you will have vans with tracks take you in to the secluded winter lodge. Snowmobile Guide Skinner Bell has been doing this for decades and will shock your teenagers with his nonchalant attitude and impressive riding skills. You also won’t mind the five-star accommodations and outdoor hot tub after a day of riding. 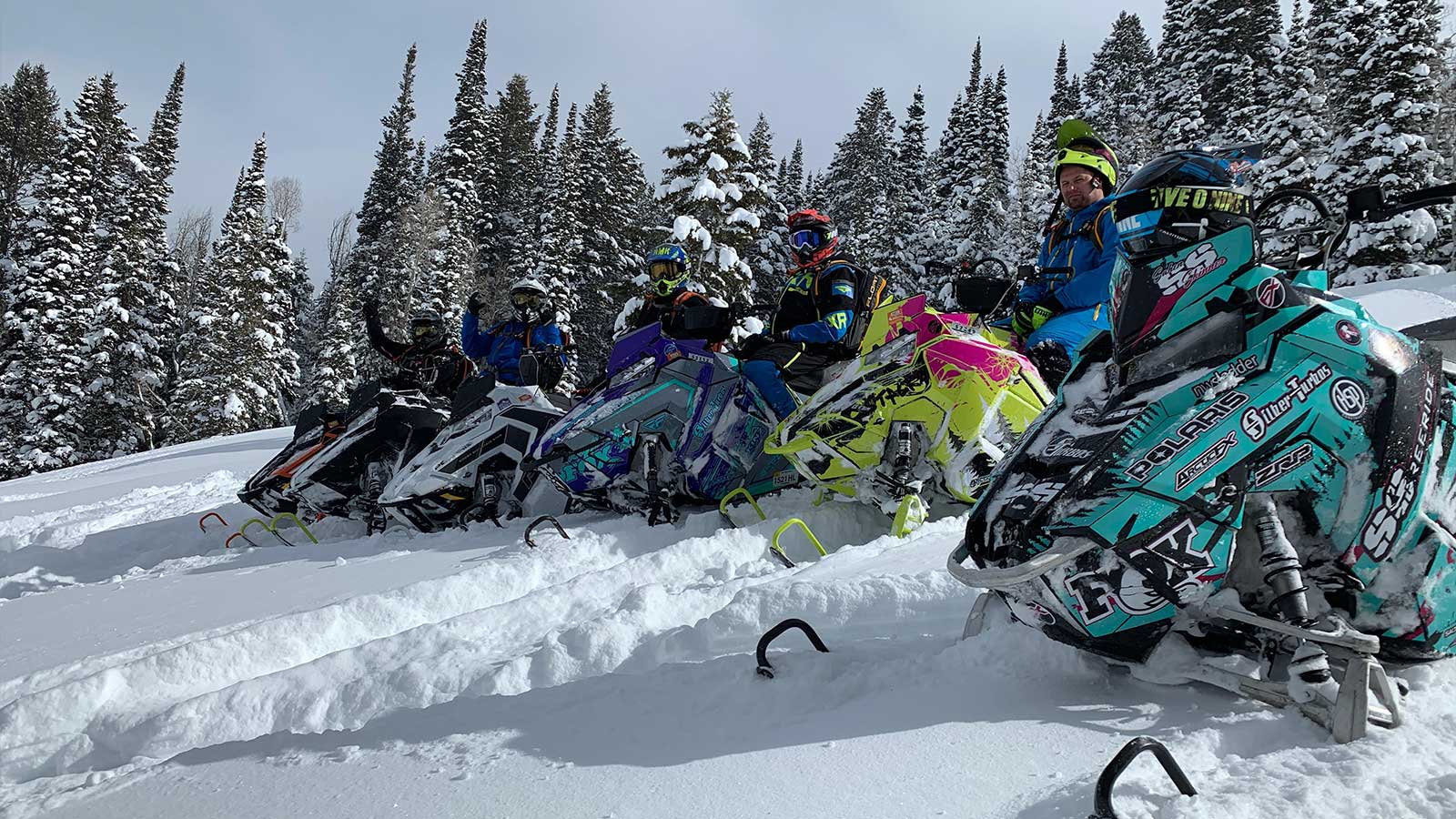 About Mandy Fabel You’ll find Mandy adventuring outside in Wyoming just about every day of the year. She takes full advantage of all seasons with her love for snowmobiling, mountain biking, rock climbing, snow skiing, dirt biking, and water sports. She and her husband Brian reside in Lander, Wyoming where they both moved to work as NOLS wildnerness guides many years ago. Today she is the Executive Director of Leadership Wyoming and together they host a YouTube and Instagram channel called Granola & Gasoline.