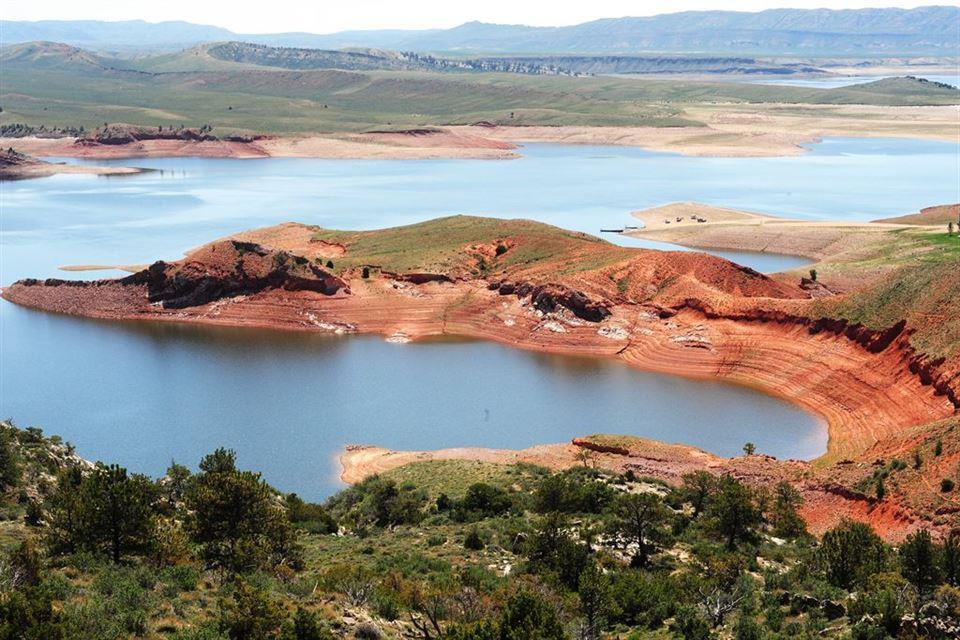 Byway Basics
The Seminoe-Alcova Backcountry Byway is 64 miles long between Sinclair on Interstate 80 and Alcova on Wyoming Highway 220. Driving time is around two hours traveling at a leisurely pace. The byway is a combination of paved and graveled roads and is generally passable from May to November. That said, the byway segment beginning just north of Seminoe State Park and running through the Seminoe Mountains to the Miracle Mile is very steep, and not recommended for motor homes or vehicles pulling trailers. There are no services along the byway until you reach Alcova, so make sure you have adequate fuel and a good spare tire. Take drinking water, food, and proper clothing–the weather can change suddenly.

Spots to Stop
Miracle Mile: a blue-ribbon trout fishery of the North Platte River.
Seminoe Sand Dunes: the impressive dunes visible from the road are part of the Ferris Dune Field, itself part of a massive geological formation which reaches from western Wyoming all the way to Nebraska.
Cottonwood Creek Dinosaur Trail: 5th graders discovered numerous dinosaur bones here in 1991. Today, these reside in a museum in Casper, but hikers can still follow the BLM trail and see many of the remaining fossils.
Seminoe State Park: spectacular boating, world class trout fishing, two campgrounds and a beach
The Nic: Once you’re off the Byway itself, you might head over to Casper, Wyoming’s second largest city and home to one of the state’s finest contemporary art museums.

A Tough Place to Strike It Rich
In 1868, three ill-fated miners registered the first mining claim in the Seminoe Mountains. None of them lived to work the site. One of the three traveled up the North Platte River to Ft. Fred Steele to register the claim. Later that day he was shot, in the words of a newspaper reporter, “just for luck.” The Army sent a Lt. Young to inform the man’s’ partners of his death. Lt. Young found them both dead, killed by Native Americans. While on the trip, Lt. Young found some gold and took it back to Ft. Steele. In 1871, Young led some other Army officials to the area where they found gold nuggets lying on the ground, covered with moss. The men formed a mining district and the gold rush began.
A freight and passenger line began operating between the mines and the railroad in 1871, paralleling part of this Backway. By 1872, 1,000 miners had flocked to the area. The failure to strike it rich and increasing pressure from hostile Native Americans ended the initial mining period in the Seminoe Mining District in 1874. That year, Buffalo Bill led an army expedition through the area to recover stolen livestock and locate the Native Americans and force them back to their reservations. The expedition was unsuccessful in its quest.

between Sinclair on Interstate 80 and Alcova