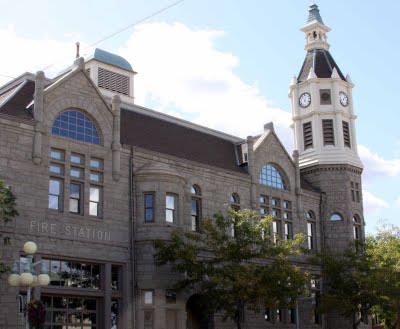 The Rock Springs Historical Museum is housed in the original Rock Springs City Hall. The building was built in 1894 at an original cost of $28,200. The funds for the construction did not come from the ever present Union Pacific Coal Company and Railroad, but from revenues collected in the issuing of liquor licenses. The building is built from native sandstone and boasts an impressive 14-foot foundation that was made necessary by the presence of “quicksand” at the site. It served as the City Hall, Police Station and Fire Station until the early 1980’s, when the new City Hall on D street was completed.

The building sat empty for some time until the Rock Springs Centennial Celebration in 1988. Through the hard work and dedication of a group of volunteers, the “Centennial Museum” opened on June 4, 1988 after only a few months of planning and designing. Artifacts were loaned and donated by local residents and the volunteers created many exhibits to show what it was like to live here “in the old days”. Because of the success of the Centennial Museum, plans soon began to make it a permanent part of the city. In 1991-1992, with funds from the Abandoned Mine Land Reclamation Program the building underwent a 1.7 million dollar restoration to bring it back to its 1890’s condition.

*Fun Fact: The building had electric lighting from the first day that it opened in 1894.*

The museum now houses many exhibits on the history of Rock Springs with special emphasis on our coal mining and multi-national heritage. Exhibits rotate regularly, so be sure to stop in often to see what is new. We can’t wait to see you!