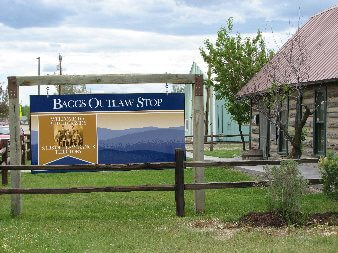 The Outlaw Stop, located in the center of Baggs, Wyoming has two buildings: The Mathews/Gaddis House and the Baggs Town Hall/Fire Station/Jail. The Mathews/ Gaddis House was home to Pearl Mathews Gaddis for over 70 years. Also, it functioned as a road house that doubled as a Satuday night dance hall. Butch Cassidy and his gang were known to frequent the home often for a good meal and entertainment. Whenever they were in town, the Wild Bunch would summon Tom Vernon, a local musician, to join Butch on the harmonica. Together, they acted as a band for dances that lasted until dawn. Cassidy and his gang never stayed in the jail, but the combination Baggs Town Hall/Fire Station/Jail saw many other notorious characters and has many stories to tell. Visit the Outlaw Stop to tour the buildings, view different exhibits, (including one about the Cow Creek Sheep Company), and hear stories about the outlaws and early Baggs residents.

A variety of books are available for purchase, and a shaded picnic area can also be found on the grounds. The Outlaw Stop is also home to Outlaw Days, the summertime events where kids can learn more about the Valley’s past.