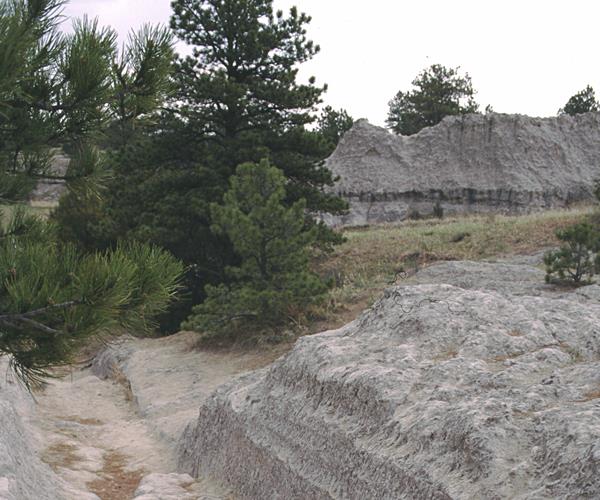 The Oregon Trail Historic Byway begins on US 26 at the Wyoming/Nebraska border. From there it follows US 26 west through Torrington, Lingle, Fort Laramie, and Guernsey to the intersection with Interstate 25 at Dwyer Junction. The total length is 57 miles and should take an hour and a half without stopping.
The History: As you cross the state line from Nebraska to Wyoming, you’re already walking in the footsteps of history. The nearby Oregon Trail Marker indicates the spot where the Oregon Trail entered Wyoming, and you’re well on your way to the Old West. If you only make one stop along this drive, make it at Historic Fort Laramie. The fort had its beginning in June 1834, when fourteen Rocky Mountain Fur Company men built a small stockaded post. During its active 56-year existence, Fort Laramie became a haven for gold seekers and weary emigrants, a station for the Pony Express and the Overland Stage, and served as an important military post during the Plains Indian Wars. It witnessed the growth of the open range cattle industry, the coming of the homesteaders, and the final settlement in the 1890s marking the closing of the frontier. The fort was abandoned in 1890, the year that Wyoming gained statehood, but visitors today can still see 22 original structures complete with an audio tour.
Nearby Guernsey State Park is also worth a stop. The park is well known for its boating opportunities and historic Civilian Conservation Corp architecture, but what makes it truly unique is Register Cliff. A sandstone precipice rising one hundred feet from the valley floor of the North Platte River, it is one of three main sites along the Oregon Trail where emigrants left inscriptions, still visible today. Stop off at the Oregon Trail Ruts as well. Although many remnants of the trail can be seen in Wyoming, the Oregon Trail tracks here are notable because they were cut into solid rock. A short trail leads to four deep gouges cut by the wheels of thousands of wagons. Highlights: Homesteaders Museum. Housed in the old Union Pacific depot in Torrington, this museum provides a glimpse back into 1880 life. Rawhide Wildlife Habitat Management Area. Take a hike and experience what the Platte River area looked like at the time of the mountain men and pioneers. Two miles south of Lingle.The Western History Center. For a small fee, you can join a real archaeological dig. Call ahead and reserve your spot. Five miles west of Lingle.Hartville. Wyoming’s oldest incorporated town, dating back to 1884. It also boasts the oldest active bar in the state, reputed to be one of the most interesting in Wyoming.Wheatland. The part-time home of the famous bucking horse, Steamboat, whose image is the official symbol of Wyoming. Check out the town’s colorful murals and equally colorful historic district.
Visit https://www.nps.gov/oreg/planyourvisit/wyoming.htm for a great guided map with highlights along the trail.