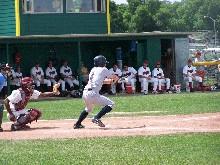 Play for the Colts:

To play for the Colts in 2008, you must be a student at a junior or four-year college and have eligibility remaining in accordance with NCAA regulations. High school students and non-NCAA players (such as former college players), as well as those who are under a current professional baseball contract, cannot play for the Colts or in the MCBL.

In order to play for the Colts, a student-athlete must receive written permission from his university.

If you meet this criteria and would like to be considered as a player for the Colts in 2008, please contact Ryan Goodwin, at Colts_baseball@hotmail.com

Cowboy Field, Home of the Colts

Cowboy Field, home of the Laramie Colts, is a great ballpark! Cowboy Field has new lights, a grandstand that seats 600 (with room for more fans in the General Admission section), a press box, restrooms, covered dugouts, a P.A. system. The Field is located at 2623 Willett Dr. just East of War Memorial Field. The dimensions of Cowboy Field are: 360 x 410 x 360.