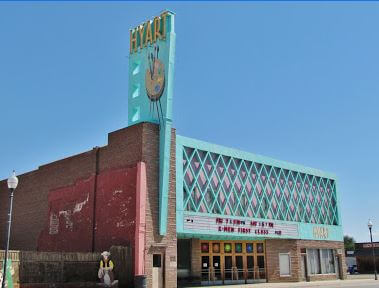 For those of you who don’t know, the Bischoff Family has been in the motion picture exhibition business since 1913. At that time, my grandfather Bischoff had a big family, and the ranch and farms were not sufficient to support them. He purchased a Ford car, outfitted it with a generator and a projector, and went to towns around the Big Horn Basin. This was done in the evenings, after he had put in a full day on the ranch, and he would take some of his kids with him. He then purchased a building, where Rocky’s is, and the whole family was involved in selling tickets, ushering, running the projector, and cleaning.
The floor was flat, and many things were held in the building. The seats were moved to the side, and roller skating and dancing was done. Traveling plays, magicians, acrobats, musicals, Chataquas, were all present on stage. When my father, Hy was married, he managed the Armada, as it was called, and purchased a building in Cowley where he showed movies on circuit with the movies in Lovell. He also ran a theatre in Thermopolis, which was managed by his brother-in-law, Ray Katzenbach.

During this time the whole family was still involved at the Armada in Lovell. Simone, Pauline, Helen, and Virga sold tickets and cleaned the building. Bob, Gene, and Hy ran the projectors. Della play the piano for silent movies.
In 1949 Hy decided to build a new theatre across the street from the Armada. He purchased the land and planned the building with his Uncle, Roy Olson, and in 1950 they started construction. The cement was mixed in a small mixer on the back of the tractor. Orvil Wilcock constructed the metal trusses for the roof from the railroad rails salvaged from old mines at Bearcreek, Montana. This was because the Korean War had begun, and there were no metal beams available. The young men who helped and the beginning went with the National Guard to Korea, leaving Hy to find some older people to help.
The Hyart had the newest technology, and was considerd the best theatre in the entire region within a 500 mile radius. Two years after it opened, Cinemascope and Stereophonic sound came out, and Hy then put the 40’ x 20’ curved screen and additional speakers required for presenting the best movies.

Hy was approached by members of the community to have Community Concerts. At that time he purchased a grand piano, added more curtains and lights, and stage mounted controls for the lights and curtains. Community concerts were sold out every year for several years.

There were Lovell school plays, band and choir concerts, Messiah put on by the Cowley school, Mustang Follies, and now the Arts Council programs.