With more than 98,000 squares miles of terrain and one person per every 111 acres, it's no wonder that Wyoming is one of the best wildlife-watching destinations in North America.

And while many travelers make the trek to Africa to watch impressive wildlife migrations, Wyoming has some of the largest and longest wildlife migrations in the western hemisphere, specifically for mule deer, pronghorn and elk. In addition, the longest mule deer migration was recorded in the western corridor of Wyoming as the deer travel from their winter range in southwest Wyoming's Red Desert to northwest Wyoming's Hoback Basin.

Also located nearby: the American Serengeti. A nickname for Yellowstone National Park's Lamar Valley, this region of the park is known for its abundant wildlife-watching opportunities, including bison, bears, wolves, coyotes, elk and moose.

A beautiful animal, bighorn sheep are often seen scaling high mountain cliffs or along roadways in some of Wyoming's national forests. For an in-depth look at bighorn sheep, plan to visit the National Bighorn Sheep Center in Dubois—a charming mountain town that sits between the Absaroka Mountains and Wind River Range. Plus, the largest wintering herd of Rocky Mountain bighorn sheep reside on nearby Whiskey Mountain, with guided or self-drive tours available. 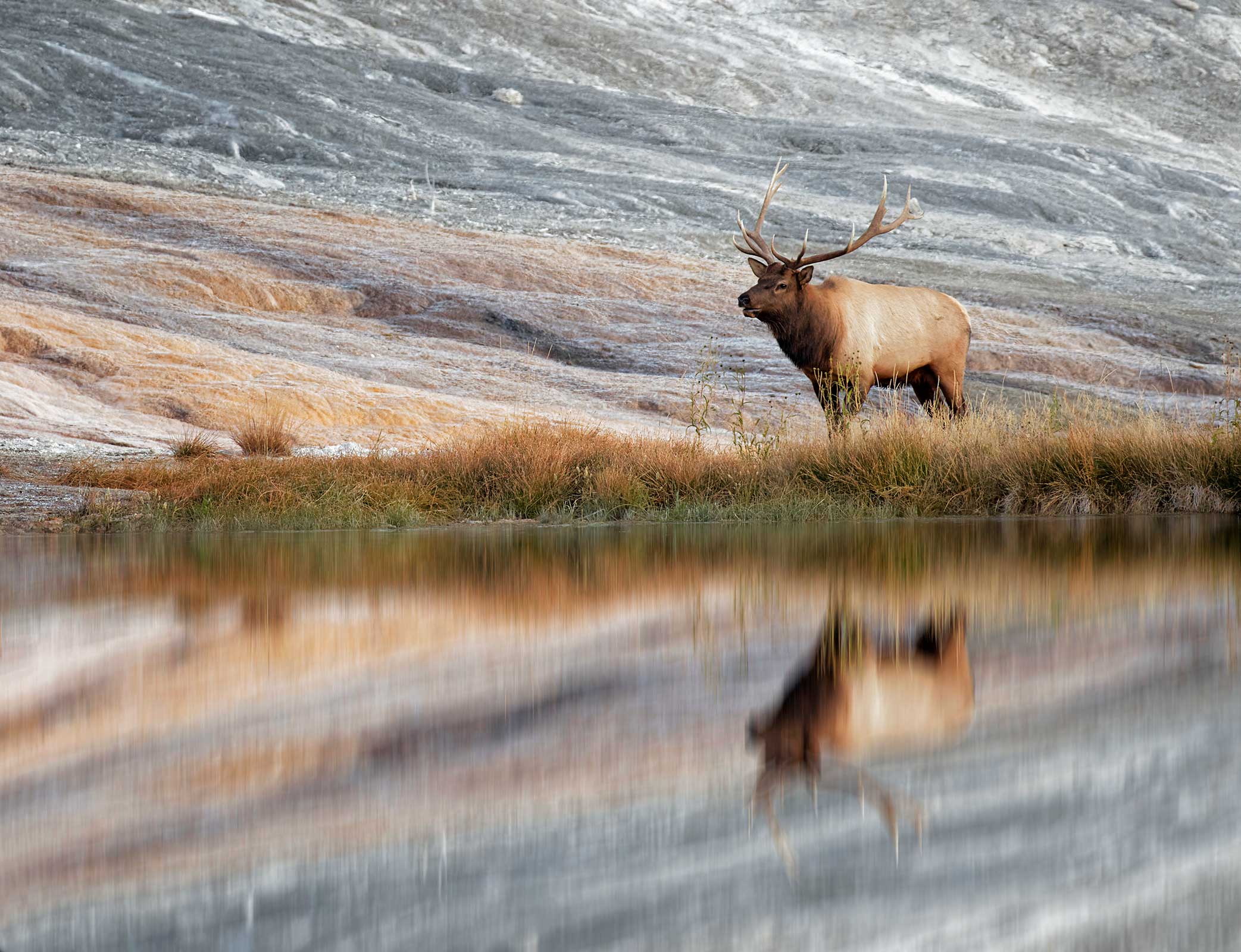 One of the largest members of the deer family, elk are found throughout many areas in Wyoming, including southeast Wyoming's Medicine Bow National Forest, the Wind River Range, northwest Wyoming and Grand Teton and Yellowstone national parks. One of the best places to see elk, especially during the winter months, is in the National Elk Refuge in Jackson. An estimated 5,000 migrating elk winter on the range and a local concessioner offers guided sleigh-ride toursduring winter.

The official state mammal of Wyoming and the United State's national mammal, bison are at home among the Cowboy State, with Yellowstone National Park being the only place in the U.S. where bison have lived continuously since prehistoric times. Travelers to the word's first national park will encounter bison throughout the year, particularly in the Hayden and Lamar valleys, with ample opportunities to see them in Mammoth and at Old Faithful.

If you're traveling through Wyoming, your chances to see a bald eagle are high, as these birds call much of the state's wide-open terrain home. To increase the likelihood of seeing a bald eagle, visit the Seedskadee National Wildlife Refuge in southwest Wyoming. During fall, bald eagles feast on salmon in the Green River, with many living on the refuge year-round. And if you're visiting during the winter, plan to head to Casper Mountain as many bald and golden eagles winter there.

Two of the most thrilling and beautiful wild animals to see in the wild are grizzly bears and black bears. While bears make their home throughout Wyoming's mountain ranges (including the Bighorn Mountains, Medicine Bow-Routt National Forest and Wind River Mountains), they are most often seen in Grand Teton and Yellowstone national parks. Areas frequented by grizzly and black bears include Tower, Mammoth, Yellowstone Lake, Hayden Valley and Lamar Valley.

One of the most exhilarating mammals to see in the wild is the moose. Weighing up to 1,800 pounds and with an affinity for open landcapes, willow trees and wetlands, moose are often spotted in these areas feeding on aquatic plants and other greenery. Prime viewing areas include Grand Teton National Park (take the Moose-Wilson Road or visit Oxbow Bend), open meadows near Jackson, Yellowstone National Park, Medicine Bow National Forest and the Bighorn Mountains.

North America's swiftest land animal, pronghorn (often referred to as antelope) are seen throughout Wyoming with many residing in southeast Wyoming's Red Desert. While more than 350 species of wildlife (including desert elk and black-footed ferret) are found in Red Desert, the largest migratory herd of pronghorn in the lower 48 states spends their winters here before traveling to northwest Wyoming for the warmer months.

A beautiful bird, trumpeter swans are most often seen during the winter months as they migrate south to Wyoming and land on open waters, most often on the rivers and wetlands of Grand Teton and Yellowstone National Parks. They can also be seen floating gracefully on the waters at Seedskadee National Wildlife Refuge in Green River.

Horses are often thought of as a symbol of the West, with many areas in Wyoming providing terrain for herds of wild horses. Three of the best places to see wild horses in Wyoming include the Pryor Mountain Wild Mustang Center near Lovell, the Pilot Butte Wild Horse Scenic Loop in southwest Wyoming and the Wind River Wild Horse Sanctuary outside of Lander.

The wild horses that live in the Pryor Mountains can trace their lineage back to Colonial Spanish American Heritage. This family of horses has been living in the Pryors for around 200 years. To see these horses, plan to take a guided tour (available from May through October) with the Pryor Mountain Mustang Center.

Seeing Wyoming's first inhabitants in the wild is an experience unlike any other. And while you may be tempted to see wildlife up close, always remember to observe from a safe distance. Stay at least 100 yards away from bears and wolves and at least 25 yards away from elk, bison and other wildlife. If an animal appears agitated, changes its behavior or seems nervous, slowly back away. More information on how to safely view wildlife can be found here.

Where to See Wyoming Wildlife

While locals and travelers alike can see wildlife throughout Wyoming, there are a few specific locations that are ideal for watching wildlife in their natural habitats.

While you may be lucky to see bighorn sheep scaling a mountainside cliff near Cody or watch moose at a watering hole in the Bighorn Mountains, there are several guided wildlife excursions that provide the opportunity to learn about Wyoming's wildlife, terrain and history, as well as provide ample photography opportunties.

See Wyoming's wildlife for yourself by booking a guided wildlife-watching tour.