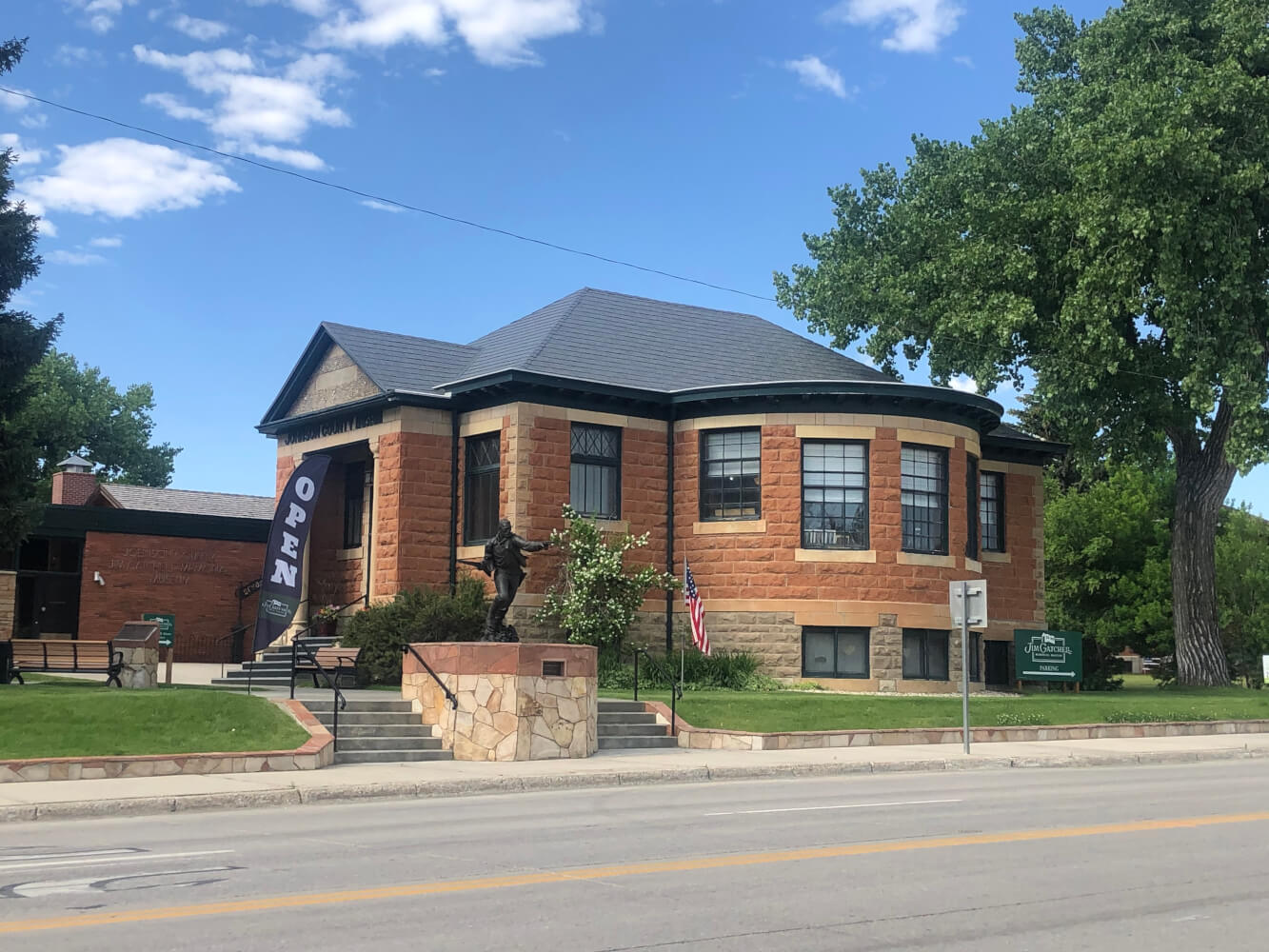 Open Year-Round. This museum is larger than it appears from the outside and features galleries highlighting Johnson County’s unique history.
Jim Gatchell was a historian, a visionary – apart from being a pharmacist – and his dedication to Johnson County has helped preserve the heritage and culture of the region. Theodore James “Jim” Gatchell (1872-1954) opened a drugstore in May of 1900 in downtown Buffalo, an establishment that became a regional landmark for more than 80 years. Through his profession, he became acquainted with many of the notorious and colorful characters from the Bighorn Mountains/Powder River Basin frontier.
These characters shared with Gatchell their firsthand experiences from the Indian wars, the development of cattle ranches, and the pioneer settlement of the region. Gatchell also developed a special and endearing relationship with the Plains Indians of Northeastern Wyoming. Having grown up on a Lakota Reservation, he was fluent in both the Lakota spoken and sign language. The Northern Cheyenne regarded him as a friend and Medicine Man. In appreciation,they often brought him rare gifts – some of which were their prized possessions.The Cheyenne gave him the name of Turpy which means He who speaks for the along with a Springfield rifle bestowed to him by Shave Head, a Cheyenne warrior.
Based on the relationships Gatchell cultivated on all sides of the battling frontier, he came to amass a collection of artifacts in the store room of his drug store, forming the earliest beginnings of the Jim Gatchell Memorial Museum. His family presented his extensive collection to Johnson County after he passed away. In appreciation to both Gatchell and his legacy, Johnson County residents raised over $60,000 for the construction of a museum which opened in 1957. The museum expanded into the old Carnegie Library in 1987 and the museum complex is located next to the historic Johnson County Courthouse.
The Jim Gatchell Memorial Museum collection contains more than 26,000 artifacts including a sheep wagon representative of Johnson County’s Basque culture, a military weapons display including firearms typical of standard issue from nearby Fort Phil Kearny, a Big Bad wolf display, natural history specimens of fossils,rocks, and a wildlife display, and numerous Native American artifacts. The museum also has a great collection of wagons and buggies in its Carriage House along with interactive exhibits featuring the Bozeman Trail, 1943 Bomber Mountain crash site, and the Johnson County Cattle War, among others. Many of these artifacts are on exhibit in the museums 15,000 square feet of gallery space, which spans across three interconnected buildings. The museum also hosts a homestead cabin built by M.D. and Sylvia Jenkins in southern Johnson County in 1916. The cabin was moved to northern Johnson County for use as a guest home before becoming a part of the museum complex in 2006. Made of timber cut from the Bighorn Mountains, it features two rooms and a real floor.
One of Wyoming’s Most Significant Artifacts on display is a bugle that has been flattened, due to the trampling of horses and cattle in the years following the Fetterman Fight. It was over 150 years ago on December 21, 1866 when Lakota, Cheyenne, and Arapaho attacked Captain Fetterman and 80 men drawn out from the protective walls of Fort Phil Kearny. At the time, it was the worst defeat suffered by the U.S. Army in the Indian Wars. Legend has it that bugler Adolph Metzger bravely fought off his attackers with nothing but his bugle. When the dust settled, it is said that Metzgers body was the only one left intact and covered with a bison hide a show of respect from the Native Americans.
In 2002, the museum gained national accreditation from the American Association of Museums – making it one of six accredited museums in Wyoming. Indeed, of the 8,500 museums operating currently in the United States, only about 750 are accredited. The museums collection, exhibits,hands-on activities and programs depict the history and culture of NativeAmericans, cattlemen and settlers of Northeastern Wyoming. The museum store features an outstanding selection of history and children’s books, jewelry, and othe rfine gifts. Many of the items found int he store are handcrafted by local artisans.